Beauty in the every day - Joshua Bell. 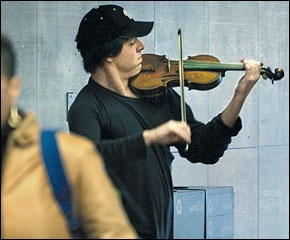 In Wahsingont, DC, at a Metro Station, on a cold January morning in 2007, this man with a violin played six Bach pieces for about an hour. During that time, approxiamtely 2,000 people went through the station, most of them on their way to work. No one knew this, but the violinist was Joshua Bell, one of the greatest musicians in the world. He played one of the most intricate pieces ever written, with a violin worth $3.5 million dollars.

Two days before, Joshua Bell sold-out a theatre in Boston where the seats averaged $200 each to hear him play the same music. The is a true story. Joshua Bell, playing in the DC Metro Station, was organized by the Washington Post as part of a social experiment about perception, taste and people's priorities. 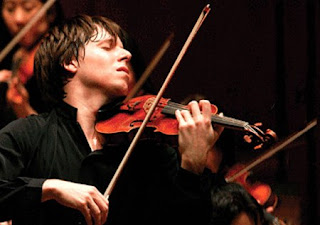 There is beauty in the every day - it's just a matter of finding it.

Posted by andrew speaks easy at 9:25 AM No comments: 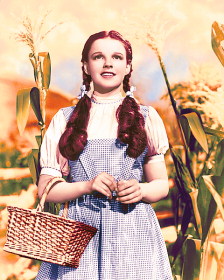 I find the world of “singledom” hilarious. The other day I had a life moment that would be unbelievable if it weren’t so true. I am definitely going to put this in my next work of fiction as its serendipitous nature colours it overtly romantic, yet entirely ridiculous.

This scene takes place in a furniture store where I was shopping for a new bed. Now before I tell you this little literary diddy, I will tell you the song I was listening to at the time while I was shopping. I like to put in the headphones and listen to music when I shop as it sends a non-verbal message to all shop assistants “don’t talk to me.”

It’s a great little Death Cab for Cutie tune called “Your new twin sized bed” and these were the lyrics I was listening too. Now I assure you I didn’t plan this, my iPhone was set to ‘shuffle’, and this song just came on as I approached the bed section of the store. I listened with a wry smile. Read the lyrics, it gives killer context.

And I hope you have more luck with this than me

You used to think that someone
Would come along
And lay beside you in the space
That they belong
But the other side of the mattress
And box spring stayed like new
And what's the point of holding onto
What never gets used?

Other than a sick desire for self-abuse

So what I would like to do now is right the little conversation I had with the shop assistant below. It’s not word for word but you will get the general gist.

Written in the first person narrative for ease of story telling.

I caught her eye as she approached and took out my ear phones. Despite my body language I actually wanted to engage.

“Hi can I help you at all?” She spoke with a pleasant smile.
“Yeh I’m looking for a new bed. I’m thinking probably a queen?” I squashed my headphones into my pocket.
“Ok well what sort of bed do you have now?”
“Well I’ve got just a double but I think it might be time to upgrade and be a real man that sleeps on a real bed.”
I smiled and she laughed. I can’t help but flirt a little with shop assistants even if this one was old enough to be my mother. She started walking over to a display and I followed.
“So is this for you and your partner?”
“No just me and my single head.” At this point I smile to myself because I think I’m being cleaver at quoting the lyrics that were humming in my head a few minutes ago, but they only existed in my mind and I realise that I’m just a big fat melodic nerd. She paused a moment like she was trying to find appropriate words.
“Well we do have some really good specials on single beds and some doubles.” I pause and remember the manners my mother taught me.
“No that’s ok I’m keen for a queen size bed.”
“To sleep in on your own?” Her face looked perplexed like the information wasn’t making sense, it contorted and I thought she looked a little frightening, kind of like the wicked witch in Wizard of Oz when she first appears to Dorothy.
“What’s wrong with sleeping on my own?”
“But do you really need all that room?” Her voice gave a slight inflection at the end of the sentence. At this point I make the decision that I will put my hard earned cash elsewhere. I also decide to leave my manners at the door.
“Hang on what’s wrong with my being a single dude sleeping in a queen sized bed?” I added ‘dude’ to soften my sharp tone.
“Well nothing I just thought it would make you feel worse.” My face now contorts as my mind can’t compute what she is saying. I then release this is a battle of Gen X v’s a boomer, my superior post modern, pop culture referenced wit will reign supreme. I really should drop in a Joss Whedon word or Buffy quote but that would be lost on her.
“Feel worse about what? Sleeping alone?” We’re not in Kansas anymore.
“I’ll have you know I like sleeping alone and stretching out like a starfish. Maybe I like to sleep in diagonals and be the long side of an obtuse triangle?” I said this all with a smile. She looked at me with that same perplexed face, like when Dorothy discovers that the Wizard is just Bert Newton behind a curtain.
“Ok well then, that’s fine. Ok so this bed comes in a package with a side table and drawers.”
She then rapidly changes the subject and continues on with her sales pitch. I place the headphones back in my ears and walk out the store. The music plays and the below lyrics ring out.

And what’s the point of holding on to what never gets used.

I got in the car and laughed my ass of all the way home. There is nothing like assumptions that you can make in one foul swoop. I love the feeling of surprising people. They look you up and down and say “no it’s ok we got it, we have you sussed.” I seem to get that all the time, people making summations based on limited information. There is a lot of fun of taking a person back to a point of knowing nothing about me, so that I can re-paint their picture. I think that's why I blog and write...a constant need to explain myself.

I think this little conversation taught me that life is life, and each stage has its purpose and beauty. And even if the cover of the book that you’re judging is a fashionably dressed, squishy around the edges bald, four eyed unclean shaven thirty something dude with great taste in music that deep down I’m like a transformer.

There’s more than meets the eye.

So from now on, I ain’t making any judgements on anyone, because you just don’t know what melodies are humming in their heads.

Check out the song “Your new twin sized bed” below.

Posted by andrew speaks easy at 11:40 AM No comments: