JESUS™ - Profit, Church, and the amazing union of oil and water. 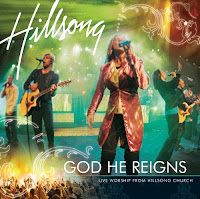 My first exposure to Hillsong was in the mid 90’s when I was still a teenager and believed that I would see a Christian revival in my lifetime (whatever that actually meant). I was a youngish Christian with a starry eye for the bright lights of Pentecostal Church Ministry that comes with its very own preaching series and books complete with a cover photo of me in a pin striped suit with hair and a fake tan.

Back then Hillsong were on the verge of moving into their newly built facility in Baulkham Hills and were still operating under Hills Christian Life Centre. My memories of this experience were quite fond, spending hours in a Toyota Tarago with friends driving from Sydney to Adelaide singing the latest Hillsong tunes and dreaming of a day when we too, would be up on stage in lights singing glory to our lord. One thing that I can remember quit vividly is the euphoric feeling of being a part of something on the verge of exploding.

And explode it did.

Hillsong is truly a global brand.

Hillsong Music Australia, a department of their church, employs 17 fulltime staff and unlike other recording labels, (like Brisbane based Dew Process which has a diverse range of artists such as Sarah Blasko, Bernard Fanning, The Panics and Mumford and Sons), Hillsong Music Australia only has three artists on its roster – Hillsong Live, United and Hillsong Kids.

Undoubtedly their most successful band is United, which founded in 1998 has now released 13 albums and along with Hillsong Live releases an album each year.

The record label is a significant income source for Hillsong Church. According to its 2010 annual report, Hillsong Church Australia last year earned a staggering $64 million, with total assets of $28.7m and income from conferences at a mere, $6.7m.

Victoria’s University Graduate School of Business produced a study (back in 2006) that showed that the tax exemption of Churches and other non-profit organizations saved those organizations more than $1 billion a year.

The Melbourne City Council told a Productivity Commission inquiry into charities (again back in 2006) that church exemptions from rates cost it $10 million a year, pushing up charges for other ratepayers by 10 per cent.

I could continue to go on here. There are many lists of facts and figures that I could quote and from various sources. I should also mention that according to their website, Hillsong Church also fund many of their own community orientated programs none more prevalent than Mercy Ministries and Hillsong City Care.

A copy of Hillsong’s most recent annual report was not easy to track down and the figures quoted here are taken from other reports and articles I was able to find. If anyone can provide me with a recent copy of Hillsong’s Annual Report I would be more than happy to post a full summation of their earnings and spendings.

We do however; live in a world that values consumption as a means to success. Below is a photo from underground street Artist, Banksy. Some Christians may find the depiction of Jesus on a cross with shopping bags in his hands as offensive, but I find it a very accurate depiction of modern day Christianity. It seems Christianity has gotten itself a little mixed up with consumerism.

Jesus turned water into wine, and now the Christian church has joined oil and water - a modern day miracle. 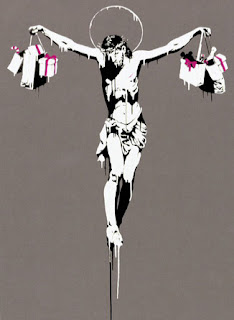 From my own simplistic and admittedly uneducated opinion of the Gospel, I was always under the impression that the calling of being a Christian was about the sacrifice of servant hood for those less fortunate than you.

What Hillsong Church (and others that profit from the Gospel, I’m looking at you Paradise Community Church, Edge, and Planet Shakers) do is further propel this consumerist culture (albeit with great intentions) that rewards success in terms of size and prosperity. If you are a Church minister today, the size of your church reflects the ability of your “calling” or validity of your skills as that churches minister.
Make no doubt about it, in Churches size matters.

Victory Church Senior Minister, Tony Rainbow wasn’t being asked to preach at conferences when he was leading a dozen Christians in a living room back in the mid 90’s.

Whether Christians like it or not, Hillsong Church has become the pre-eminent poster boy for success when it comes to western Church. And if you’re part of a church that signs their songs, and hangs colored lights – I’m sorry but either directly or indirectly, you wanna be like big sister.

There is a lot of money to be made from Jesus and the Gospel, and many churches around the world are making quite a bit. But in light of the Occupy Movement currently growing momentum (ironic considering all they do is just sit around), big corporations are being called to show greater consideration for the poor and those less fortunate in our society and the world – and how much more should churches be leading this charge.

Shouldn’t the Christian Church be the example of giving to the rest of the world? What information I could find was that in 2004 Hillsong Church made $50million in profit and gave $2.4 million to charity and/or community focused programs. Now I don’t know how accurate these figures are, but it was difficult to find information on how much they spent rather than how much they earned. I’m no auditor, but with the size building they operate and the many staff it would take to fund such a complex, this isn’t the least surprising.

But why does the Western Church need to follow the Hillsong model by providing slick Sunday services, great looking buildings and worship teams that play the latest hits? If the Christian church’s faith is so strong, shouldn’t it still thrive if it was operating in people’s livings rooms, where no buildings were needed and everyone just, well, looked after each other – and there would be no need to buy worship albums.

Is the western Christian faith keeping the world poor? Would the horn of Africa exist if Christians around the world were just as happy to share their faith around a coffee table, and give their tithe and CD money, directly to the third world, instead of propping up first world churches so they could pay their power bills?

Suddenly, without any of us realizing is seems that believing in Jesus has become quite expensive.

I don’t know the answer, but while churches like Hillsong continue to make millions of dollars in profits, while paying no tax, and the world continues to struggle to feed itself, Christianity will continue to fight a legitimacy battle when even the churches are struggling to practice what they preach.